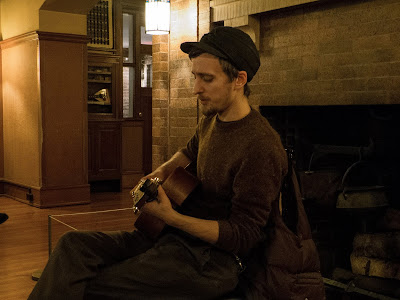 -Audience Recording using Zoom H2 rear internal mics >SD Card>PC>Adobe Audition>CD Wave Editor (split tracks)>TLH>FLAC Level 8
-"A "Midwest Sounds" recording (MWS099)
-Feel free to re-master, share on any other torrent site, convert to MP3, just never ever sell it. Also, if you like this show, please support the artist by buying their music and seeing a show next time they're in your area.

Kyle Ollah is a folk fiddler, old-time banjo player, and singer-guitarist. In late 2018 he released, "Used To Wear That Old Straw Hat, but Now You Wear the Crown", an album compromised of what are traditionally solo-vocal folksongs, reimagined for guitar and five-string banjo accompaniment . Through the years Kyle has also spent a little time performing and recording with folk musician Charlie Parr, and in 2016 the two collaborated on the title track of Ollah's EP, "Wouldn't Mind Working From Sun to Sun",  as well as Parr's Red House Records release, "I Ain't Dead Yet". You can also catch him with MPLS musician, Mumblin' Drew, or fiddling for dances in old barns and out-halls across the Upper-Midwest with Merila Hill String Band and Four Mile Portage.
Posted by Dan at 1:03 AM