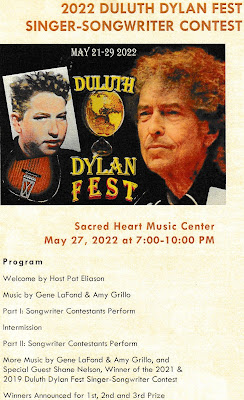 Pictures of the event here: Link

This is a "Midwest Sounds" recording (MWS144)

**************************
Tapers notes: I've wanted to get to this event for a few years and the timing never worked out until this year. Most of the musicians here were from the area, but there were a few that traveled from far away (Prague, Arkansas). Artists were only judged on their original song, then played a Dylan cover as their second song. My personal favorite was Skarlett Woods, who won second place. Her original was the best of the night in my opinion, and her cover of "You Ain't Going Nowhere" is breathtaking. I had never heard of her, and have since seen her a few times, she's a wonderful musician. I've included copies of the program given at the event, there is a rundown of all the musicians and they songs they chose to sing. There are a few in there that chose a different song than what was listed, so if you notice a discrepancy, that's why.

Placing was as follows: