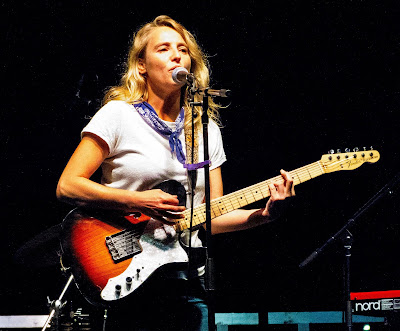 -Audience Recording using Zoom H2 rear internal mics >SD Card>PC>Adobe Audition>CD Wave Editor (split tracks)>TLH>FLAC Level 8
-"A "Midwest Sounds" recording (MWS089)
-Feel free to re-master, share on any other torrent site, convert to MP3, just never ever sell it. Also, if you like this show, please support the artist by buying their music and seeing a show next time they're in your area.


There's a clicking/rattling noise on the recording throughout the show. It's most audible when the bass is very present. I have no idea what it is, where it came from or why it's there. I tried everything I could in Audition to remove or lighten the presence of it, but just couldn't get anything to work. With that in mind, I would recommend this recording only to big fans of Lissie, or someone who feels the need to have every recording out there.


"LISSIE grew up in Rock Island, Ill., near the Mississippi River, speaking her mind and writing songs from an early age. Her fourth studio album, “Castles,” was released on March 23, which promptly cracked the Top 10 in the UK album charts. The new music follows the release of her 2016 album “My Wild West,” which peaked at number one on the Billboard Heatseekers chart and Top 10 on the Independent Albums chart and received widespread critical praise. Lissie also appeared in the most recent season of David Lynch’s “Twin Peaks” with NME saying of her intense performance: “Closing the episode with the Stevie Nicks-esque ‘Wild West,’ Rock Island’s most exciting troubadour more than earned her Lynch-commissioned screen time."
Posted by Dan at 2:44 PM