-Audience Recording using Zoom H2 rear internal mics >SD Card>PC>Adobe Audition>CD Wave Editor (split tracks)>TLH>FLAC Level 8
-"A "Midwest Sounds" recording (MWS122)
-Feel free to re-master, share on any other torrent site, convert to MP3, just never ever sell it. Also, if you like this show, please support the artist by buying their music and seeing a show next time they're in your area. 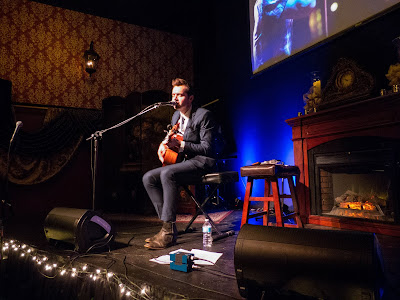 
Minneapolis based Ben Kyle is the Belfast born songwriter and architect behind the critically acclaimed eponymous album BEN KYLE featuring the award-winning songs Mercy and Don't Settle. Kyle synthesized the roots music he absorbed in midwestern America with his Irish folk upbringing and went on to release 5 heralded albums as the singer-songwriter and frontman behind the Americana critical darlings Romantica. Paste Magazine named Romantica's 2007 release America "One of the Best Albums of 2007" but No Depression declared that Shadowlands (2016) was "Undeniably their best."The winner of 10 International Songwriting Competition awards, Ben has worked with Ryan Adams (The Dark feat. Ryan Adams) Lucinda Williams, Alejandro Escovedo, Sara Watkins and Dan Wilson (Adele) among others.
Posted by Dan at 11:23 AM