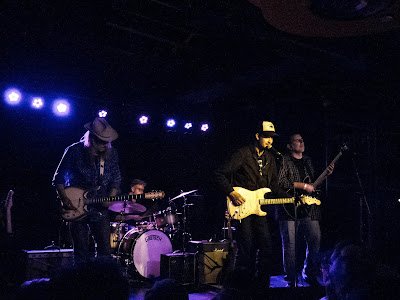 -Audience Recording using Zoom H2 rear internal mics >SD Card>PC>Adobe Audition>CD Wave Editor (split tracks)>TLH>FLAC Level 8
-"A "Midwest Sounds" recording (MWS103)
-Feel free to re-master, share on any other torrent site, convert to MP3, just never ever sell it. Also, if you like this show, please support the artist by buying their music and seeing a show next time they're in your area.

Erik Koskinen’s Burning the Deal (out June 28, 2019 on Real Phonic Records/Tone Tree Music) is steeped in American roots traditions. Born in Fort Collins, Colorado, raised in Northern Michigan and upper New York state, then living in urban Minneapolis and now, rural Minnesota, Koskinen grew up with the rhythms of weather, factory towns, and farmlands. Koskinen worked in construction for years as he developed his music career, and he now resides on a farm near where he owns a recording studio in Cleveland, Minnesota, population 717.

Of Burning the Deal, he says, “It’s not only Americana music. I learned how to play blues music. I learned how to play country music, and how to play folk, bluegrass, jazz, whatever. I learned how to play American music.” The nine songs share a stripped-down, almost naked quality, but complexities lie just under their skin. Part of that depth can be attributed to the top-notch players Koskinen recruited: Greg Leisz (Jackson Browne, Beck, Joni Mitchell) on lap and pedal steel and mandolin, plus the rhythm section of drummer Jay Bellerose (Alison Krauss and Robert Plant, Willie Nelson) and bassist Jennifer Condos (Don Henley, Marc Cohn, Ray Lamontagne). As for how he managed to gather them together — twice — for recording sessions in Ojai, California, Koskinen quips, “In the music biz, you’re always one person away from knowing the president.”