-Audience Recording using Zoom H2 rear internal mics >SD Card>PC>Adobe Audition>CD Wave Editor (split tracks)>TLH>FLAC Level 8
-"A "Midwest Sounds" recording (MWS127)
-Feel free to re-master, share on any other torrent site, convert to MP3, just never ever sell it. Also, if you like this show, please support the artist by buying their music and seeing a show next time they're in your area. 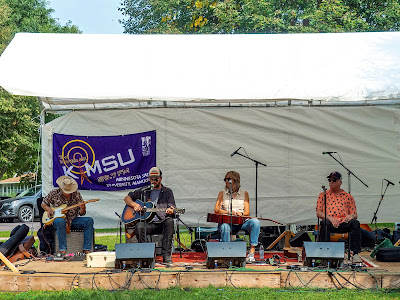 Sprouted from a blend of American folk, country, rock-n-roll, and blues, Erik Koskinen albums are a lyrical and musical metaphor of America’s theaters of war, history, relationships, and reflections in the mirror. Knowing but not didactic, Koskinen channels the ways of Whitman and reverently enters the anthology of uniquely crafted wry songs with the likes of Woody Guthrie and Ry Cooder while speaking as plainly as your neighbor. The Minneapolis Star Tribune calls Koskinen “the real deal” and “the best country songwriter in Minnesota.”
https://erikkoskinen.com/
Minnesota songwriter and singer Becky Kapell picked up her teenage son’s guitar on a whim and began teaching herself to play at the tender age of 42. With no intention of writing songs, as she taught herself basic chords, melodies began to emerge and then somewhat magically lyrics attached themselves to the melodies. She recorded 12 of those songs with old friends in Portland, Oregon (where Becky lived as a young adult), for her first record For Now, released in 2012. Based on the strength of that recording, Becky caught the attention of respected Minnesota musician/guitar player Paul Bergen and as the two began playing together her song-writing morphed from the folkier sound of her first record to the more guitar-driven sound of her 2018 release, That Certain Ache. They have continued to play and record together along with Becky’s band The Fat 6 which often includes various luminaries from the Minnesota music world.
http://beckykapell.com/
Pat Donohue is an American fingerstyle guitarist born in St. Paul, Minnesota. He is a Grammy nominated, National Fingerpicking Guitar Champion songwriter. Donohue has several albums to his credit and his songs have been recorded by Chet Atkins, Suzy Bogguss, and Kenny Rogers. He has performed on A Prairie Home Companion for many years.
https://redhouserecords.com/artists/pat-donohue/
Posted by Dan at 2:12 PM