-Audience Recording using Zoom H2 rear internal mics >SD Card>PC>Adobe Audition>CD Wave Editor (split tracks)>TLH>FLAC Level 8
-"A "Midwest Sounds" recording (MWS126)
-Feel free to re-master, share on any other torrent site, convert to MP3, just never ever sell it. Also, if you like this show, please support the artist by buying their music and seeing a show next time they're in your area. 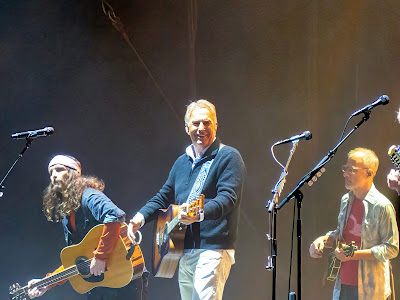 After the last song, there was about a minute of an officially released song playing in between that song and the outro. I cut that, so unfortunately the transition isn't very smooth, but nothing was lost as far as the live show goes. There is also a Q & A after the show, I have included that in a separate folder.

Kevin Costner has starred in numerous blockbuster movies, including The Bodyguard, Bull Durham and The Untouchables and won two Academy Awards for Dances With Wolves, which he wrote, directed and produced. He recently starred in the western thriller Let Him Go with Diane Lane, as well as in the television drama series "Yellowstone." This special evening at the Minnesota State Fair Grandstand features a performance by Costner’s country-rock band, Modern West, followed by a live Q & A with the actor. The evening wraps up with a showing of Costner’s iconic film Field of Dreams.
Posted by Dan at 5:26 PM