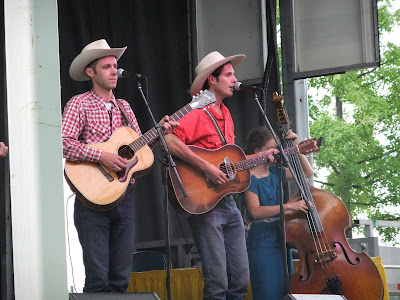 -Audience Recording using Zoom H2 rear internal mics >SD Card>PC>Adobe Audition>CD Wave Editor (split tracks)>TLH>FLAC Level 8
-"A "Midwest Sounds" recording (MWS037)
-Feel free to re-master, share on any other torrent site, convert to MP3, just never ever sell it. Also, if you like this show, please support the artist by buying their music and seeing a show next time they're in your area.

"... the album I've listened to the most this fall is by The Cactus Blossoms ... It's true and traditional country, folks”
Craig Shelburne, Country Music Television

“It's easy enough to phone in a cornball imitation of old country ... It's another thing entirely to live and breathe the craft of writing and singing a good country and western song as The Cactus Blossoms have done"
Nikki Miller, City Pages (Minneapolis)

"... harkens back to the roots of country with their earnest songs and pristine harmonizing”
Chris Roberts, Minnesota Public Radio
Posted by Dan at 7:11 PM